The Latteria Sociale Mantova dairy was founded in 1929 as a central dairy for the supply of pasteurized milk to the province of Mantua, and today it is the biggest cooperative in north-central Italy, specializing in the production of Grana Padano, cream, drinking milk and whey concentrate.Over 90 years of history for a dairy that is “growing young”: these are the words of Alessandro Bassani, who has been working in the Sales Office of Latteria Sociale Mantova since 2010.He tells us about the history of the dairy. He explains that in addition to a team of young people in the various offices and departments, they are laying the foundations for a generational change in the management of the individual dairy farms, in which the children of the cooperative members are carrying on the work started by their fathers and, in some cases, their grandfathers, to ensure that the strong reputation of the cooperative continues in time.We are also reminded of the devastating earthquake that struck Emilia and the lowlands of Lombardy in 2012, which caused serious damage to the dairy. In a very short space of time, however, it had the strength to start again.Alessandro recalls that the members and tradespeople got busy straightaway, working alongside the specialist workers to clear the 3 ageing storehouses which housed around 100,000 wheels of Grana Padano and had collapsed with the earthquake. Half the cheese was recovered. Within three months or so, the facilities had been rebuilt and the situation was back to normal again, although, with great pride, the dairy never really stopped production and carried on working so as not to lose its position in the international markets.Yes, because the Latteria Sociale Mantova dairy exports its products worldwide! Here to talk to us about exports are Claudia Deodati, Sales Administration Manager, and Vincenzo Allena, Export Manager. 70% of our products are exported; the main country of export is Germany, but our Grana Padano (MN427, MN437, MN473) reaches as far as the Americas, Oceania, Asia, Africa... everywhere! The target industries are large-scale retailers and supermarket chains, food services and quality catering providers, delicatessen establishments, the food industry and so on.Given the scale of business, the dairy decided to expand its sales network by welcoming new, dynamic and motivated figures into the staff, which have made the Group's commercial team excellent.There are almost 200 collaborators, including direct and external employees. 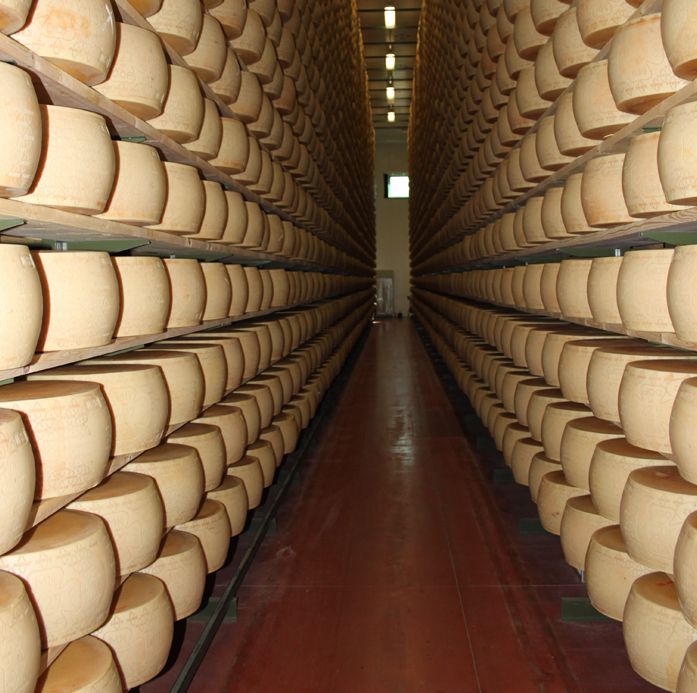 194 associated farms and 600.000 litres of milk that are processed every day in 3 factories in the province of Mantua (Porto Mantovano, Marmirolo - Latteria San Sebastiano, Bagnolo San Vito - Dairy Formigada).Since 2015, with a view to modernise and renew our image with a change of logo, packaging and a new presence on the web, thanks to a highly functional 2.0 site, and with the implementation of Facebook and Instagram pages, in order to always be in contact with consumers and friends.LSM's has now a fixed presence in all major international trade fairs: ANUGA in Cologne (Germany) and CIBUS in Parma see the company participate regularly with its own large exhibition space.Just as the successes of Latteria Sociale Mantova at the various world competitions for cheese producers are a source of pride; First and foremost, at the World Cheese Awards, during which LSM won several gold medals.